Last May, Leo and I spent a weekend together back home in Lebanon. We were keen to go off the beaten tracks for a few days and decided to walk a section of the Lebanon Mountain Trail (LMT) in a northern a region I am not familiar with.

The LMT is a long-distance, 470-km long hiking trail that goes through the Lebanese mountains, from Andqet in the North to Marjaayoun in the South. It is a great initiative, one of its kind in Lebanon, supported by a team of amazing mountain guides and volunteers that promote rural development and eco-tourism. The LMT crew organises every year a Thru-hike that lasts 30 days. However, each section can be done independently as most of the trails are blazed (see website for further details). Nevertheless, I wouldn’t recommend attempting certain sections alone, as they take you through very remote areas where you need to speak Arabic well, and have a good grasp of safety measures.

Going up the mountain pass between the two northern villages of Kfar Bnine and Bekaa Sefrine, following section 4 of the #lebanonmountaintrail. The well blazed path took us through rivers, steep hills, forests, and old roads used by villagers to fetch drinkable water. For anyone keen to discover #Lebanon, read up on the amazing work of LMT, and follow the purple and white signs! #hillwalking #hiking #livelovelebanon 🇱🇧 @lebanontrail @livelovebeirut

The section we set out to do, from Kfar Bnine to Beka Sefrine was one of them. The night before, we slept at Majid Guest House in Bekaa Sefrine as there are no guesthouses for now in Kfar Bnine. The road we follow to get there, north of Tripoli, is well indicated on Google maps, as long as you read Arabic. Despite our late arrival, Majid and his wife greeted us with cheerful smiles and a massive feast, which included a local version of the Lebanese Labniyeh – a yogurt-based stew with meaty dumplings, mujaddara, vegetable soup, pizzas, and a Lebanese ratatouille, in honour of the French guest. Throughout dinner, we discussed with Majid, his wife and his elderly mother the perks of growing old in such a pretty town, as well as the hardships of living in a remote village forgotten by the Lebanese state. A highlight of our discussion was when Majid’s 80 year old mother proudly told us “I’ve been to Australia to visit one of my sons and experience a life where you have access to running water and electricity – but nothing compares to the view I have when I’m sipping my morning coffee on my balcony in Bekaa Sefrine!”.

We had an early start the next day, to make sure we get back to Beirut on time for a drink in the city. Nevertheless, even at 6 in the morning, it was hard to say no to the creamy labneh, the fried eggs with fresh thyme and the warm tea prepared to us by Majid’s family. On his way to work, he dropped us off at the trail head in Kfar Bnine and we start our walk, following the LMT’s purple and white signs diligently. 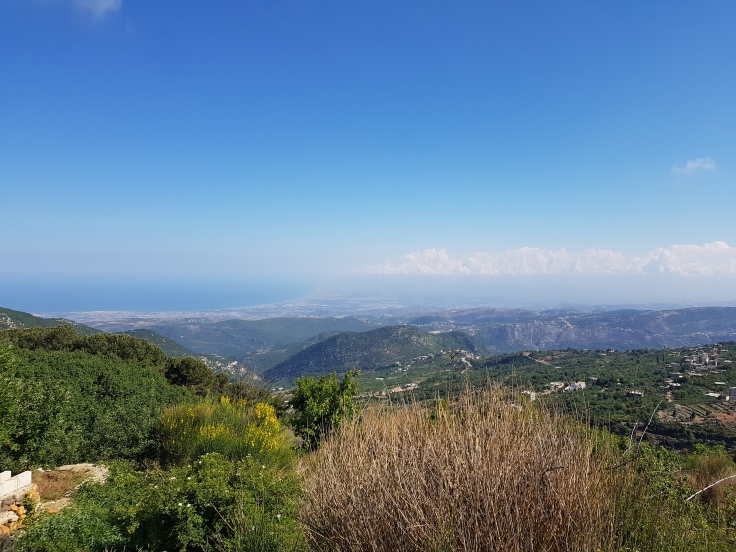 The first part of the walk took us along a networking of water pipes and straight up to agricultural terraces, very typical of Lebanese landscape, from where we caught a glimpse of the coast and of Tartous in Syria. We continued on agricultural roads and makeshift trails, sometimes playing a balancing game when these sat alongside big boulders. Most of the villagers we met were intrigued by our aim – why walk when you can afford a car? A few even insisted on driving us back to Bekaa Sefrine and only let go once I explained that Leo is a foreigner. Inevitably they all laughed and say “Ah yes, these foreigners do crazy things!”

Slowly, we started getting closer to imposing, steep cliffs I had no idea ever existed in Lebanon  – a country better know for its round and welcoming peaks. The views were breath-taking, but unfortunately, clouds started coming in and our cameras failed to capture the grandeur of the scenery. Thankfully, the trail didn’t take us into the cliffs. Instead, we veered south after crossing an impressive river – the region’s lifeline –  that even in this time of year was more like a violent torrent of water. Unfortunately, we had to use a main road I would have preferred avoiding for safety reasons, but thankfully the trail quickly took us back into a thick and dense forest that reminded us of the hikes we went on in Uganda and Costa Rica. 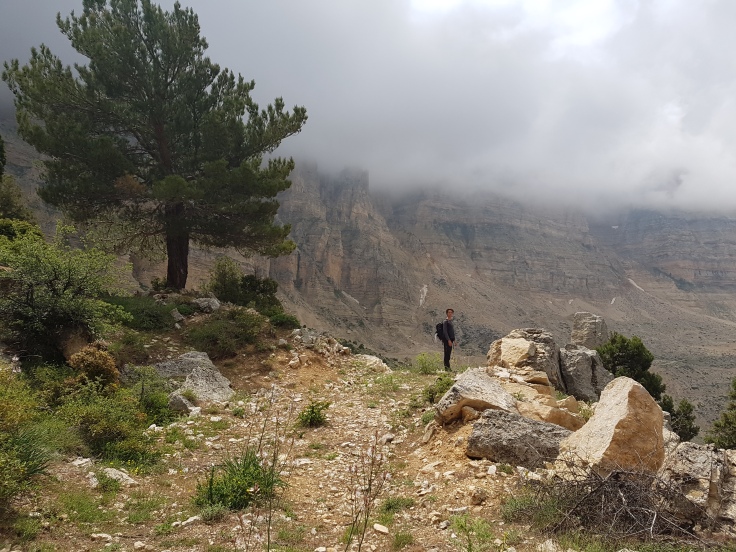 Once out of the forest and onto an dirt road, we stopped at a view point looking down on an imposing gorge for our picnic, and hurried up to complete the walk. The last few kilometres left us breathless: Instead of walking along the main road all the way up to Bekaa Sefrine, the LMT signs led us to a set of half broken stairs that connect to a narrow cement road built into the mountain and overlooking the villages nearby. We walked along this eerie path, which as it turns out, was used by villagers to fetch drinkable water as recently as the 1950s, and ended up right where we had started, at Majid’s guesthouse for one last coffee before heading back to Beirut. 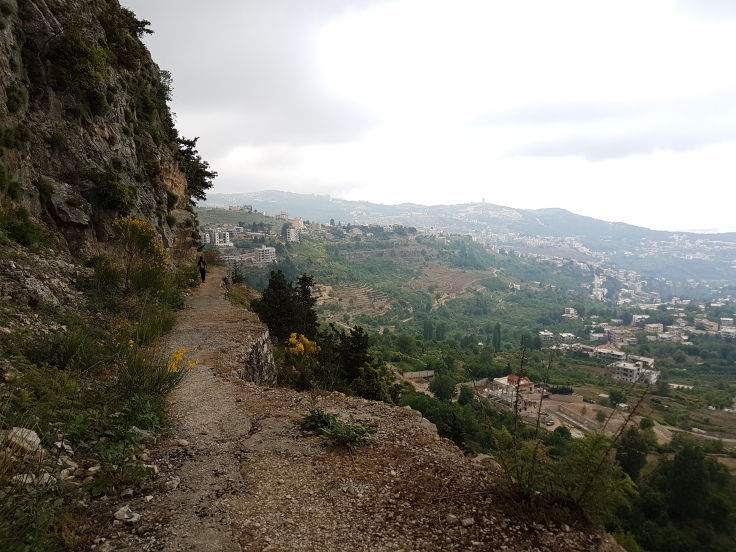